Skip to main content
Flight couture for the climate?/

We joked that Yasava was fake — and the COP26 believed it, and removed them from a list of "net zero" companies. Sadly, they were very real.

On Monday, Nov. 8, the Yes Men sent out a fake press release on behalf of private-jet outfitter Yasava with some very real news about this utterly, profoundly not-carbon-neutral company: it had been accepted into two of the COP26's "net zero" carbon offsetting schemes, of the sort that scientists assure us make no sense at all, except of course to the companies who greenwash themselves in their bountiful eco-lather.

The reality of a private-jet interior decorator being part of these "net zero" initiatives was sure to expose them for the crap that they are. So to make sure it was noticed, and because confusion can equal attention, we sent out "admissions" that Yasava itself was a hoax made by the Yes Men, who'd even gotten them covertly accepted into the COP26 "net zero" schemes.

It worked. The National (archived version; also available on the Wayback Machine) reported at length that Yasava was a Yes Men invention, with briefer pieces in The Guardian (as emended) and The Scotsman (hey fowk — gonnae no forget to update yer story!!).

We expected Yasava to insist on its own existence, or a journalist to suss it out quickly. Although some Twitter sleuths were indeed on the case, our "fully reveal everything quickly" policy was in danger, so we gave Yasava a nudge: 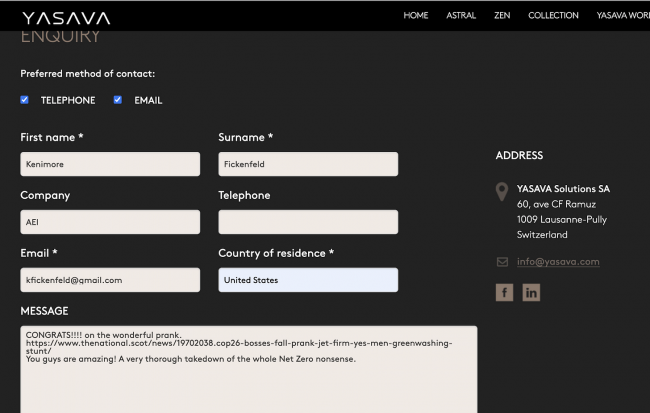 "CONGRATS!!!! on the wonderful prank…. A very thorough takedown of the whole Net Zero nonsense"

Though Yasava didn't respond, The National helped to unravel things when they asked the COP26 for comment.

Translation: "Yasava, which despite peer review we didn't realize was fake — which it obviously is, because yeah, right, 'air fleet couture,' duh — has been removed from our stamp-of-credibility, guiding star program, which, trust us, remains chock-full of companies that really, honestly deserve to be there."

The COP26 team simply had no idea whom they'd accredited, nor why. Nor did our respective reveals make them peer more closely — they simply put Yasava back in "Race to Zero." (Another “net zero” program, the “Science Based Targets Initiative,” seems to have airbrushed Yasava out of their records, but we know they were part of the SBTI as late as September.)

The National updated their article:

The Guardian, for their part, merely added some words (underlined below); the rest of their article — about what one can deduce about a climate initiative that includes a private-jet-interiors company, whether fictive or real — didn't have to change even one bit. 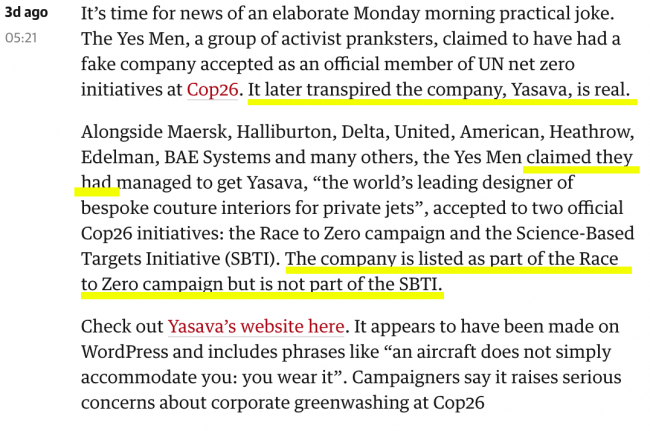 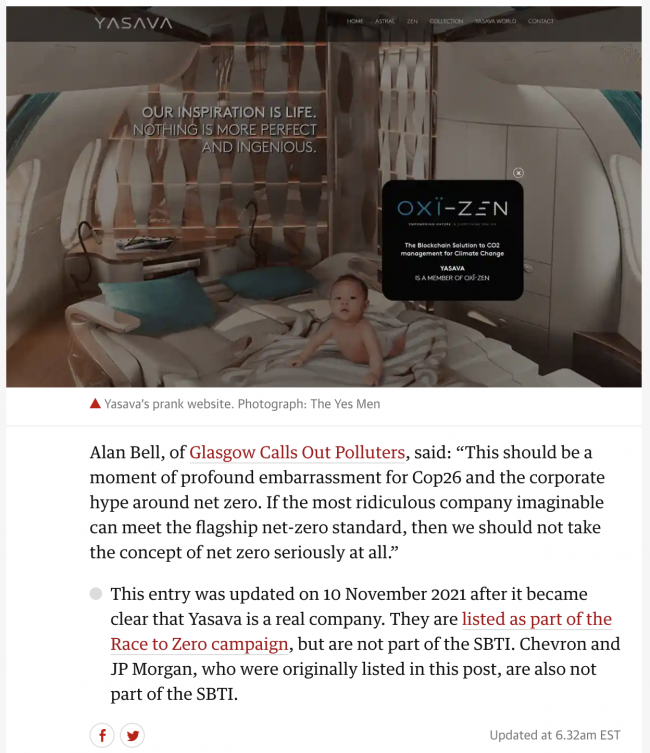 The Guardian, at least, had gotten the point.

See more "behind the curtain" stories