Skip to main content
Husky helps a city get ready/ 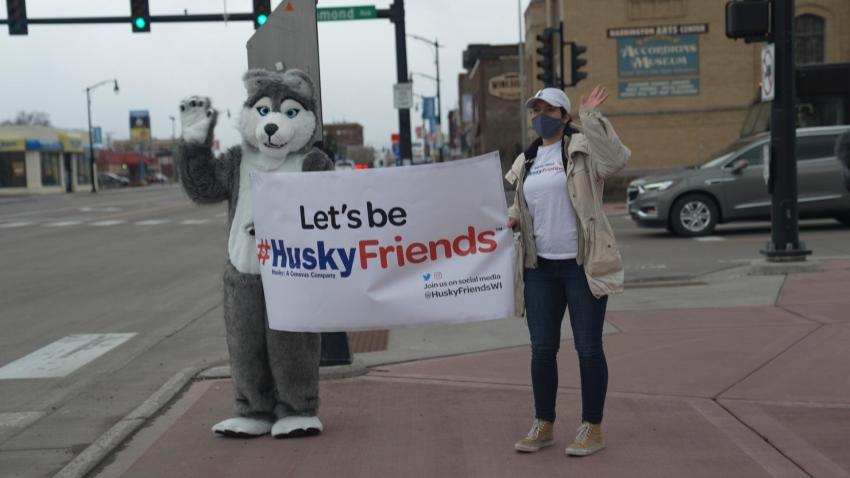 SUPERIOR, WI - Yesterday, on the anniversary of the 2018 explosion of their Superior Refinery, Husky Energy, part of the Cenovus group of companies, launched “Husky Friends,” a huge outreach effort supposedly aimed at calming fears about the continued use of hydrogen fluoride, a lethal chemical used in oil refining that was nearly released in the 2018 explosion.

“Husky Friends” representatives conducted public engagements in Duluth and Superior, passing out brochures and entertaining residents with a Husky mascot, even meeting with Superior mayor Jim Paine. The program also sent postcards to thousands of homes near the refinery, inviting residents to sign up for SMS alerts about future explosions, as well as a “Compassion Kit” that includes a cream for chemical burns, a hydrogen fluoride detector for kid’s bedrooms, and a coloring book. The warnings and Compassion Kits were made available to everyone living within the so-called “Friend Zone,” the area in immediate danger during a catastrophic hydrogen fluoride release. The website and brochures also featured horrifying medical facts about hydrogen fluoride exposure, including its capability to cause death with exposure to as little as 2.5% of the body.

Then, shortly after "Husky Friends" launched, a panicky statement was released by Cenovus, formally rebuking the group of activists for impersonating them, and promising much legal action.

It was all part of an elaborate hoax concocted by the Modest Proposals, a collaboration of Extinction Rebellion members and the Yes Men.

“Husky Friends may be satirical, but it mirrors Cenovus’s ghoulish disregard for the community’s well-being,” said Modest Proposals member Jim Haugen. “They’re putting the safety of thousands upon thousands of people at risk by using one of the most toxic chemicals known to humanity, in a refinery that already blew up once, just to make a few extra dollars.”

“As the climate crisis intensifies, we don’t have to accept the short-term trade-offs that corporations like Enbridge and Cenovus offer,” said former Superior resident Dr. Meghan Krausch. “We can, instead, embrace—and act upon—another vision, one that places an inherent value in Superior’s location on an aquifer of artesian water, the powerful beauty of Lake Superior, or the municipal forest, rather than seeing them simply as things to exploit and be sold off. The future is not a luxury, and we don’t have to sacrifice anyone.”

Local residents have started to mobilize against the refinery and its continued use of hydrogen fluoride and are calling on Cenovus to pause the Superior Refinery rebuild.