Elect Biden, then give him hell

This January, if Biden enters the White House, he’ll inherit a humongous mess — and not just because the place is rife with the coronavirus.

Many people worry that a Biden administration won’t accomplish much. At a time that cries out for systemic change, Biden is a longstanding centrist.

Yet the two presidents who brought us the most important progressive legislation of the 20th century were also longstanding centrists who inherited giant messes. Critically, both of those presidents — Franklin D. Roosevelt and Lyndon B. Johnson — faced pressure by mass movements shortly after they were elected. And Biden must too.

Roosevelt inherited the ruins caused by the Great Depression. At first, he worked mainly to help corporations recover, with a few social programs thrown in. But a series of massive strikes, plus the threat of a new Labor Party, convinced FDR to push through Social Security, the Works Progress Administration and other legislation known as the New Deal.

Johnson was also a longstanding centrist. He opposed every civil rights measure that came up for a vote during his first 20 years in Congress. 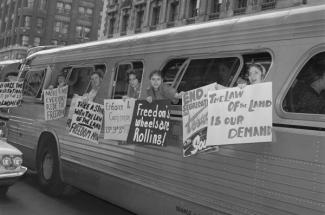 But when John F. Kennedy was assassinated, he found himself in a White House that the civil rights movement had repeatedly shamed over its failure to address racial inequities. Johnson succeeded where Kennedy had failed, passing the Civil Rights Act of 1964 through relentless determination.

Biden will inherit the devastation of an out-of-control pandemic hitting a disorganized health “system,” an economy whose unfairness was evident before the pandemic, racial tensions nearly as high as when LBJ took office and much more.

There are signs that Biden has read the winds of change. His platform includes versions of the Sanders and Warren platforms on health care, housing, education and transit. A one-time “tough on crime” politician, he now favors significant criminal justice reforms and considers his support of the 1994 crime bill “a big mistake.”

But many supporters correctly feel this won't be enough. What Biden now stands for, while better than before 2020, is insufficient to level the playing field, curb police violence (he’s still against shifting funds from police departments to social programs) or reestablish "the American Dream" of social mobility.

As with previous centrist presidents, only the pressure of mass movements will push Biden to do what’s needed. Again, history is instructive.

Not long after Johnson’s triumphant passage of the 1964 Civil Rights Act, Martin Luther King met with him to discuss a Voting Rights Act to protect Black political representation in southern states. But Johnson was reticent to push southern congressmen further so soon. “I just don’t have the power,” he told King several times.

Leaving that meeting, King declared to his lieutenant that they had to “get this president some power.” Shortly afterwards, protesters began marching from Selma, Alabama, to present the governor with their grievances. When police violently cracked down on the marchers, the sights and sounds were splashed across the whole nation’s TV screens. Shortly afterwards, the 1965 Voting Rights Act was introduced and passed into law. The act remained in full effect until 2013, when a conservative U.S. Supreme Court gutted its key provisions.

Our first step, of course, must be to do everything in our power to get Biden elected. After that, we'll need to show our new President just how troublesome mass movements can be.

In other words, we’ll need to give him the power.