Creating a Full and Sustainable Stewardship Model for Africa

(These comments were delivered by "Hanniford Schmidt" on Saturday, November 11, 2006, as part of a panel called "Trade in Africa: Enhancing Relationships to Improve Net Worth." Throughout the comments by Schmidt and his three co-panelists, Schmidt's "stewardee," "Thomas Bongani-Nkemdilim" (actually Jack Waters), remained standing at respectful attention off to the side, prepared to perform a special "peace dance" if things became uncomfortable. They never did. "Hanniford's" first 5 minutes of prepared comments below, with slides, were in response to the following prepared question. The video of this talk can be viewed here.)

QUESTION ONE: "As people interested in African economic development, we are compelled to ask ourselves about the extent to which trade is serving as a vehicle for economic growth and poverty alleviation in Africa. Why have we seen limited progress with respect to growth and poverty reduction, despite Africa’s richness with respect to resources which it can export/monetize?" 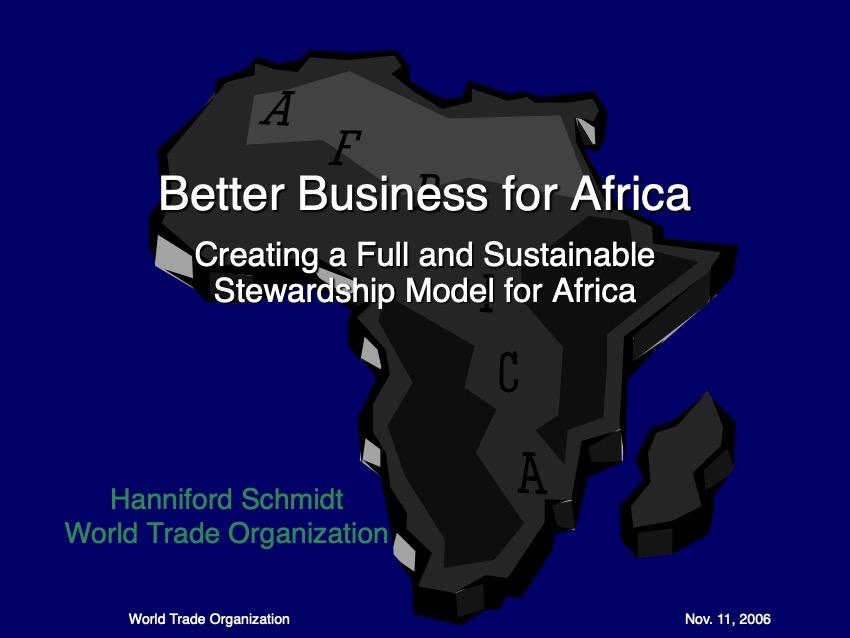 Nothing's perfect. There is a consensus across the world's most successful countries that the free-market/free-enterprise system is the best system there is, and really the only system possible in the world such as it. We therefore must operate within its bounds. 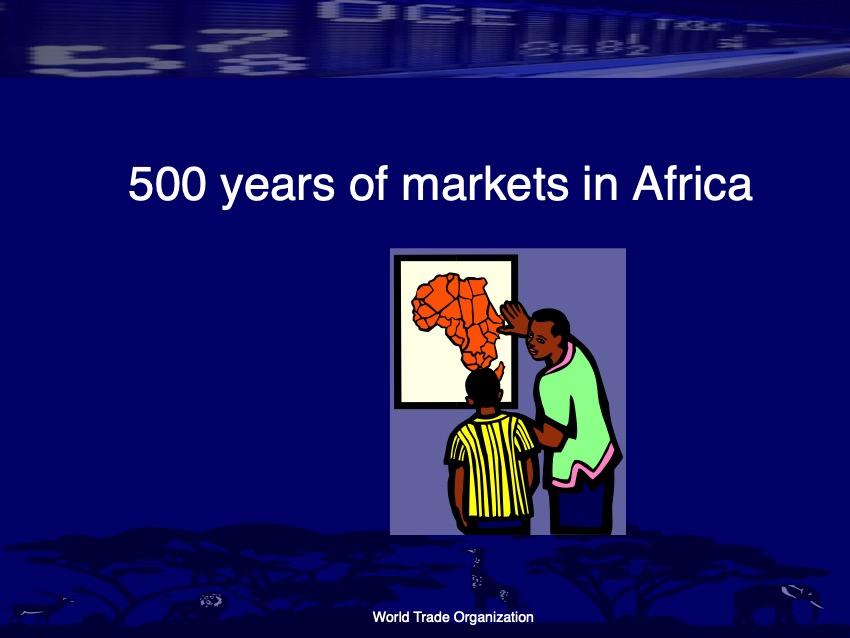 Still, it is imperfect, because unfortunately we're dealing with humans here. But we needn't be enslaved by these imperfections if we can understand them. So let's take a quick look at the three phases of business involvement in Africa: 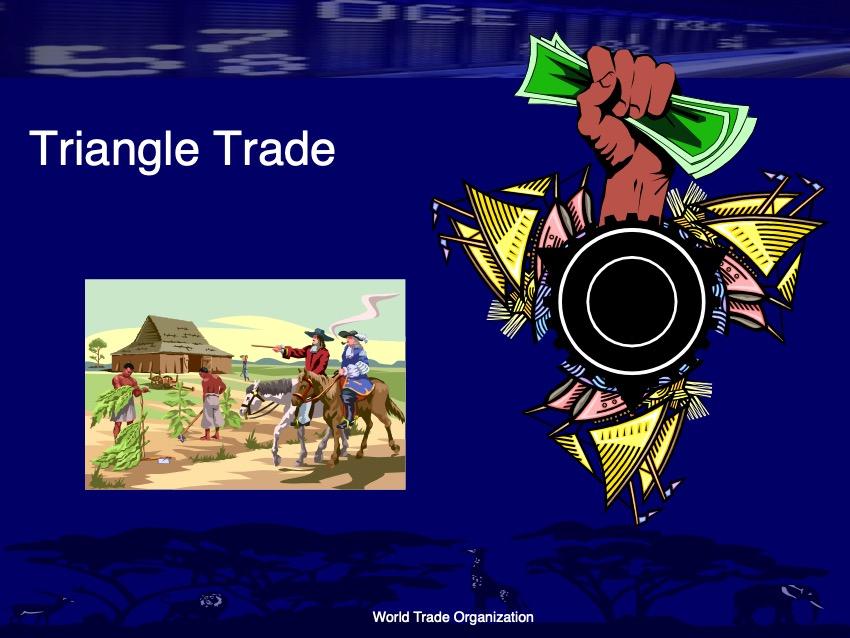 1. First, the "Triangle Trade," also known the slave trade. This was the trade between Europe, the US and Africa for 400 years. It built North America, and permitted the Industrial Revolution and so all the technology we now enjoy. For Africa, the benefits were more limited. It did lift the revenues of certain small groups—but the rest suffered from enormous mortality rates, the collapse of civilizations, and poverty 10-20 times as extreme as it had been—which is the level it's stayed at ever since. 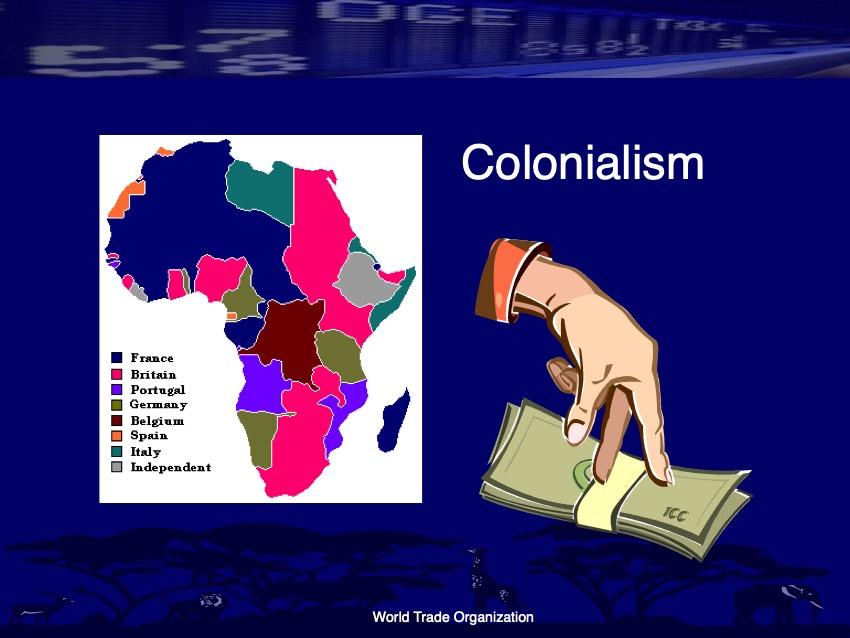 2. The second phase was that of colonialism. Pretty much the same record as with slavery—great for the West, built up huge fortunes; not so good for Africa: even more dead than before. 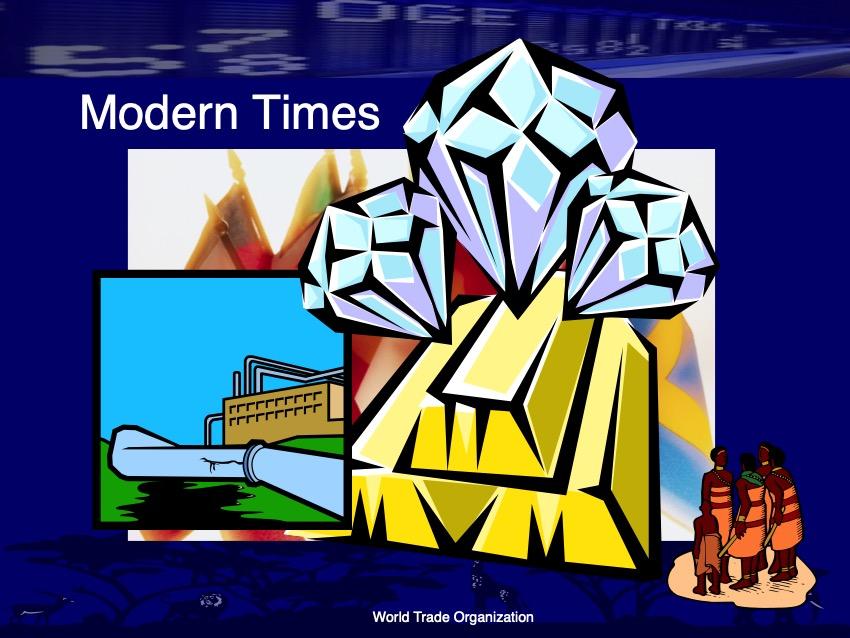 3. Finally, we have the modern market. Again, very lucrative for the West, new resources like oil, but as Laurie and I are well aware, it's been very bad for Africa. 200 million malnourished, 15 million refugees, 11 million AIDS deaths, astronomic tolls in conflicts.... Higher tolls than under the Triangle Trade or colonization. 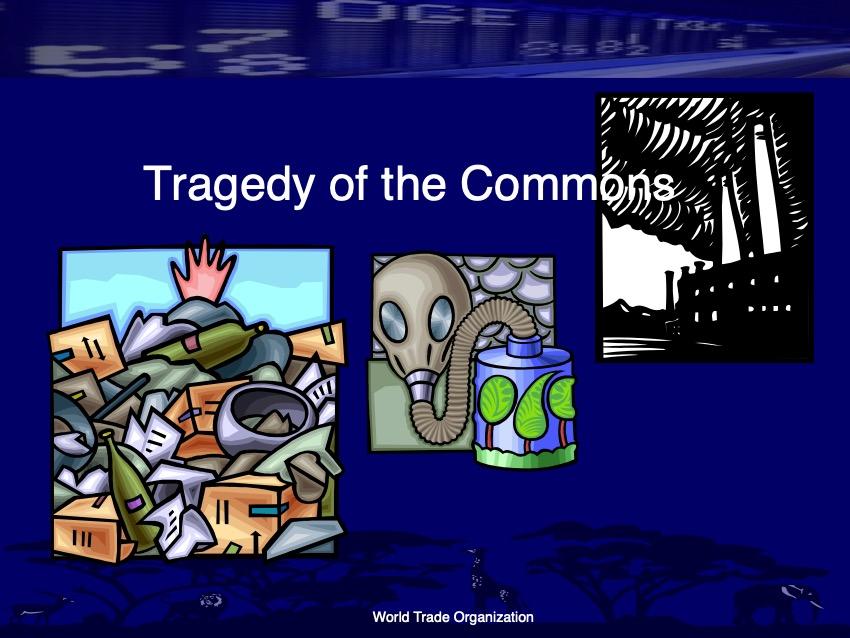 With progress, more and more is falling under the rubric of private stewardship: government oversight has been abolished not just for goods, it's been abolished for services like electricity, transport, water—even traditional knowledge and now the human genome. It works, and we at the WTO believe that a full private stewardry model is the only possible solution to African poverty.

Ironically enough, our guiding star in this matter comes from ecologists, who have found a way to save our earth's most majestic creatures—by establishing tradeable rights for them. 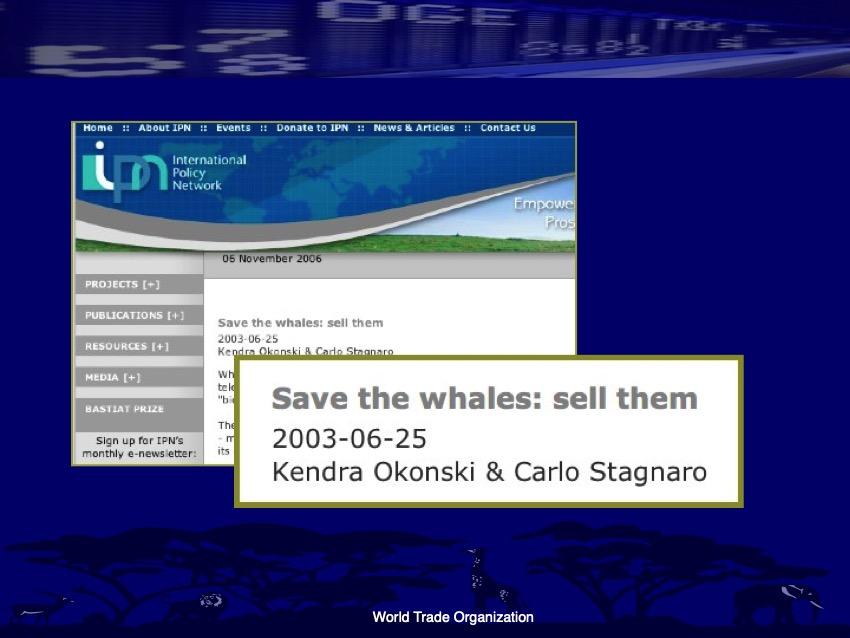 Those who don't like whaling can purchase rights to specific whales and to groups of whales in order to make sure that those whales don't get whaled as much. 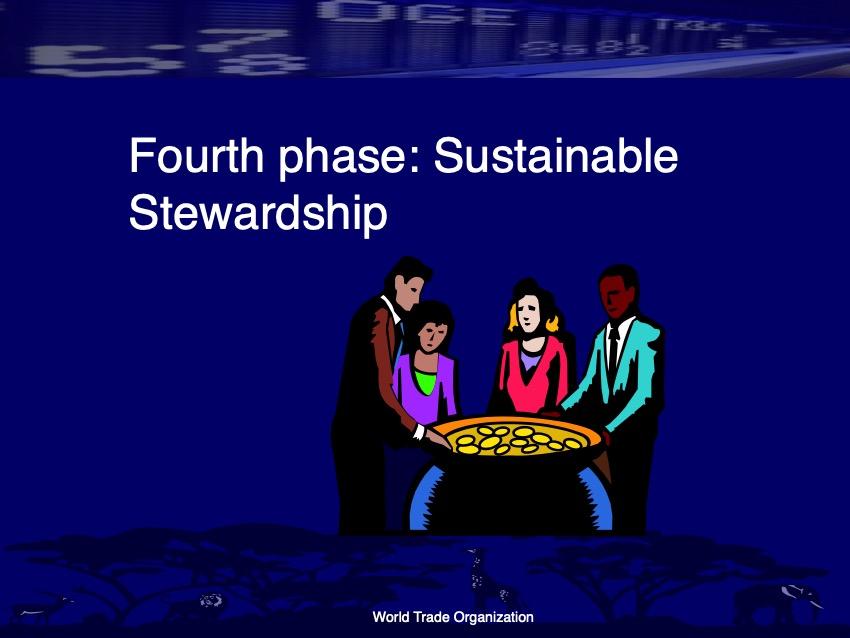 In Africa, the effects of full stewardship for the most at-risk populations would be felt right away.

Today, in African factories, the only concern a company has for the worker is for his or her productive hours, and within his productive years—which is why as soon as there's AIDS or pregnancy, out the door! Get sick, be fired! If you extend the employer's obligation to a 24/7, lifelong concern, you have an entirely different situation: get sick, get care. With each life valuable from start to finish, the AIDS scourge is quickly contained via accords with drug manufacturers—it's an investment, dammit! And educating a child for later can make more sense than working it to the bone right now. 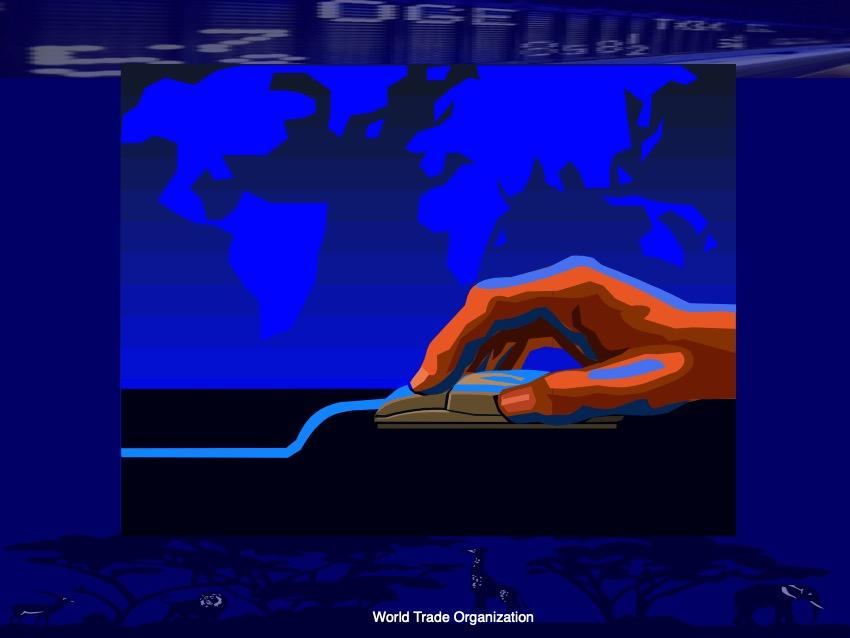 The full stewardship market will empower First-World consumers to make a real difference. Right now, I may care about poverty in Africa, but my hands are tied. Imagine though how it'll be when I can exercise full stewardship directly over the targets of my worry. 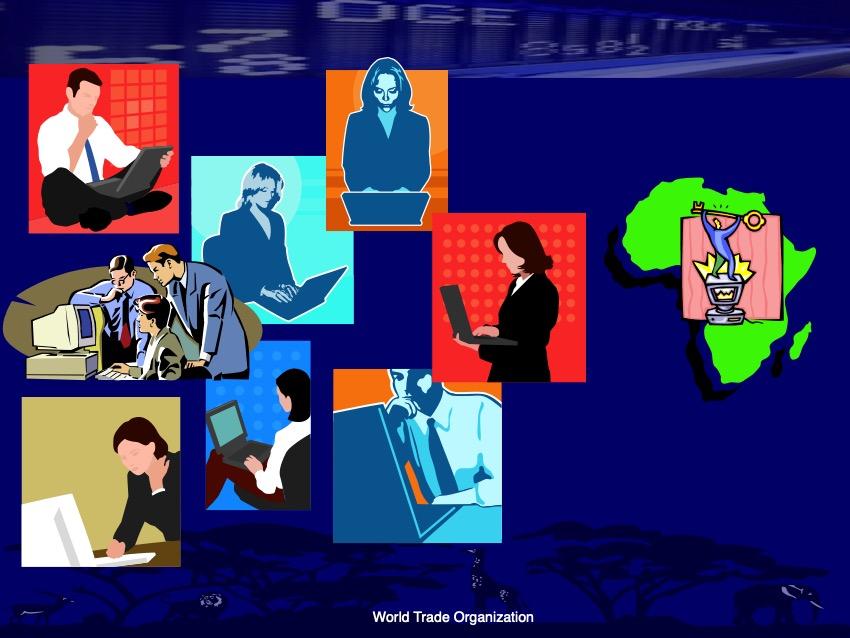 This market will operate online, just like the NASDAQ, and have a physical headquarters in the city of Cape Coast in Ghana, whose long history of cooperation with the West makes it an ideal location.

The situation in Africa is too extreme for Oxfam volunteers or microloans to make a statistically significant difference—more vigorous solutions are called for. Which is why we at the WTO have chosen full private stewardry as the only possible free-market solution. 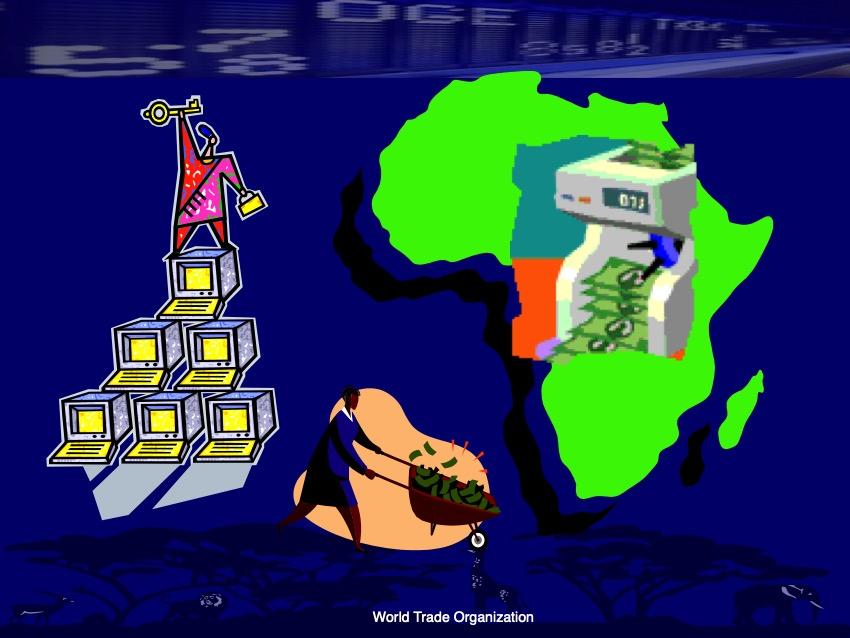 It's where free-market theory inexorably takes us. Any other solution will upset the tender balance of our most cherished freedoms.

(After some agreeable comments by UN Trade Representative for Africa (see video of presentation), "Hanniford" delivered the following 5 minutes of prepared comments in response to the second prepared question.)

QUESTION TWO: "We are hearing so much about the issues of size and scale.  Logically, it seems as if access to capital would be the answer to this.  Entrepreneurs should be able to access the capital markets to obtain money for expansion.  Is this the case?  How is the trade financing landscape changing to facilitate trade and economic growth through trade?"

Well let's take a quick look at how the trade financing landscape has changed for the African entrepreneur and his access to capital markets.

1. In the times of the "Triangle Trade," there were of course African entrepreneurs—they were the ones who sold non-entrepreneurs into slavery. No trouble accessing capital markets there. [sad affect]

2. Under colonialism, there was much entrepreneurship, but it was Western, and the role of the African was to service the Western companies who were doing the entrepreneuring. No real need for access to capital markets in this case, so no real problem on that front.

3. Today, access to capital may be a challenge, but African entrepreneurs are such an infinitesimal portion of the market as to be completely irrelevant—no offense to Ms. Kobes, but all of it is nothing next to a single Coke or Exxon.

And that's precisely why we need a fourth phase for business, whose burden is to tap into the enormous relative purchasing power of the West and direct it to the benefit of the African, entrepreneur and non-entrepreneur alike—and again, that's simply called stewardry,

For the 500 years of its history, free-market policies have failed dramatically to help Africans. The culprit is clear: market failures, as any textbook will tell you, are usually due to not going far enough. Yes, stewardship or privatization have been applied to health, education, water, and even the human genome, but the market has still not been able to exercise its sway to the fullest. Full, untrammelled stewardry is the only possible solution to African poverty, and the inevitable, inexorable, and elegant result of free-market theory. We at the WTO are committed to making it happen.

(For the audience questions and answers that followed, please see the video.)