(These press releases were sent out by SaveCanada organizers. See also this article, among many.)
TransCanada tries to replace Grassroots with P.R. Assholes
Leaked TransCanada documents about their proposed Keystone XL alternative, the Canada-spanning Energy East Pipeline, show just how dirty TransCanada is willing to get in their desperate attempt to ship dirty tar sands oil to the coast. According to these leaked documents, some of that dirt is to be slung at the Yes Lab. 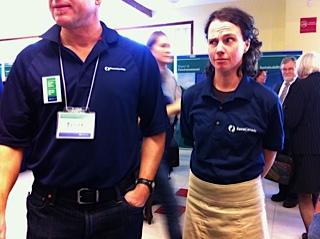 To push their newest mega pipeline, they hired the mega misinformation PR goons Edelman to mess with the communities and groups along the route. The leaked documents show the strategy of attacking grassroots groups with smear campaigns while at the same time establishing phony grassroots to emulate support. Third-party proxy groups would be used to do the smearing, and to "put the pressure on, especially when TransCanada can't"—while the phony grassroots support would be conducted by the same Edelman PR gang that were caught astroturfing for the fake 'Working Families for WalMart' campaign (among other notable PR fails).
Perhaps TransCanada posing as a grassroots movement to establish phony public support was somehow inspired by the YesLab's SaveCanada action where we impersonated their PR team at their official community consultations.
In towns across Canada, troupes of mischievous activists swarmed TransCanada's events dressed just like their reps, but with lookalike "SaveCanada" shirts, name tags and brochures. Instead of promoting the pipeline, the SaveCanada reps communicated the risks. They even used TransCanada's map for an impromptu game of Pin the Spill on the Pipeline.
In one of the leaked documents SaveCanada is listed second on a list of groups targeted by Edelman for conducting "a preliminary audit of opposition groups and their messages."
Elsewhere, SaveCanada is listed as a national group that apparently "migrated (their) efforts and expertise into the Canadian policy arena." It seems Edelman's prowess for misinformation even extends to the briefings they put together for their client TransCanada.
TransCanada has run into difficulty selling this Keystone XL replacement to the public, and out of difficulty comes desperation. The leaked documents vow they will "add layers of difficulty for our opponents, distracting them from their mission and causing them to redirect their resources." This is part of their "pressure approach." All this is very classy for a company that has just filed this Energy East Pipeline project for regulatory consideration in Canada so is currently trying to sell themselves to the communities as a "good neighbor."
Edelman is the largest public relations firm in the World and Energy East would be the largest tar sands pipeline in the World. One leaks dishonesty and the other would leak diluted bitumen.
The main strategy document leaked emphasizes the ruthlessness of these tactics by saying, “we cannot allow opponents to have a free pass.” We would very much agree with that sentiment, but change it slightly, "we cannot let our opponents build the Climate-destroying, community-polluting Energy East Pipeline."
Image

O Canada! SaveCanada needs mischievous folks in Ontario and Quebec to stop TransCanada's latest Tar Sands pipeline—by dressing up and talking to people over the next three weeks! Visit www.save-canada.com for full details and to join, to watch the video, and for an account of one action.

As you may know, TransCanada is now planning another pipeline, this one sending oodles of tar sands crud east.

This time, they're employing a special new tactic to bypass the opposition that's stalled two other pipelines (south and west): instead of holding a town hall, which lets citizens see how many other folks are concerned, they've switched to a trade-show format where an army of TransCanada reps can limit questions and conversations to a one-on-one level. The result: folks don't get to see how widespread the opposition is in their own community.

When TransCanada came to one Canadian town to promote their new pipeline, a group of locals took action: they made outfits and handouts nearly identical to TransCanada's own, but branded as "SaveCanada." At the event, they spoke with citizens about risks, handed out pamphlets, pinned "bitumen spill" stickies on TransCanada's big pipeline map, and otherwise ruined TransCanada's plans. Connections were made, people were empowered, and a town, once paralyzed, blossomed into a powerful and mobilized community.

Now, citizens from all over Canada (especially Ontario and Quebec) are invited to join SaveCanada over the next three weeks and disrupt all the rest of TransCanada's "Open Houses."

In towns across Canada, troupes of mischievous activists are successfully derailing the attempts of TransCanada—the company building the stalled Keystone XL pipeline—to ram through their latest proposed project, the Energy East pipeline, which would bring over a million barrels of Tar Sands oil to the East Coast for export, primarily to Europe and Asia.

During previous pipeline projects, stakeholders were able to express concerns in front of their whole community. To impede the type of opposition that has stalled past projects, this time TransCanada has changed the format of community consultations, turning them into trade-show-like promotional events where stakeholders can only speak one-on-one with company representatives (or PR contractors hired for the occasion).

To outwit this latest ploy by TransCanada, local activists all along the pipeline route have been swarming these events dressed just like TransCanada reps, but with lookalike "SaveCanada" name tags and brochures. Instead of promoting the pipeline, the SaveCanada reps communicate risks.

The series of SaveCanada actions began at TransCanada's open house in North Bay, where roughly 30 TransCanada reps were surprised to see their meeting overwhelmed by newcomers wearing nearly identical shirts and also carrying slick PR materials, but with a twist.

Now, ten other towns have orchestrated their own versions of the prank. When TransCanada came to the Montréal area on September 24, members of the Québécois SaveCanada counterpart, "SansTransCanada," nearly outnumbered the TransCanada reps. A Global TV segment even identified a SansTransCanada activist as a TransCanada rep.

The Montréal SaveCanada action came to a carnivalesque conclusion when attendees were invited to play "pin the bitumen spill on the pipeline" and a crowd formed around TransCanda's large route map to see where the sticky-note spill would end up.

NASA's James Hansen has said of the Keystone XL pipeline that, if built, it will be "game over" for the climate. This is truer still for the Energy East pipeline, as it's designed to carry a greater volume. The new pipeline also threatens the local communities in its path with inevitable leaks.

"In the next few weeks TransCanada is holding more of these so-called 'consultations,' and we are looking forward to seeing them derailed by every community they hope to fool." said Roberts. "Then we'll see what they try next, and we'll derail that, too."

"Companies may try to invent new ways to fool people, but citizens will always be more powerful because we care more," said Shona Watt, a local organizer of the Montréal SaveCanada/SansTransCanada action. "What's guaranteed is that, ultimately, people will win."