(Why did Democrats lose an election to someone as pathetic as Trump? Here's why. And here's how we fix it: let people decide how the world ought to be, and  stop leaving decisions in the hands of the children with the most toys. The Democratic Party could serve people by fighting for what people need and want, and that therefore wins elections.
We expected some drama, but it was all so reasonable that nobody noticed it wasn't real. These ideas are still good post-Trump!)

Thank you, Jennifer. The "Better Deal" is indeed a profound turning point that takes us right back to our progressive roots. As Sen. Schumer said last week: if you lose to someone with 40% popularity, "you look in the mirror and say, 'What did we do wrong?'" And I'd like to add, you also have to take action in order to win the next time around. 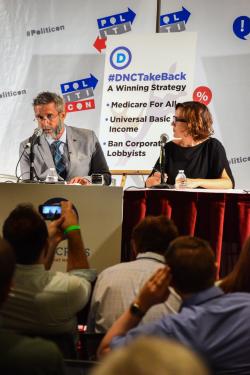 And so that's what we've done. Back in December, we began a series of town halls and focus groups to determine what voters across the political spectrum needed and wanted, so we could understand how we'd failed to address those concerns. What we found mirrored the national polls, as well as a whole slew of state and local elections:

Once we had understood which concerns we had failed to address, we began to look at how we could do so in the future. And that's when we realized: we couldn't. Our hands were tied, in large part because of our donors:

If we were going to have a "Better Deal"—if we were going to adopt the positions that could actually win future elections—then we had to begin by severing our donor relationships, which would also pave the way for a more collective kind of fundraising support, which was proven quite possible in this last election on both sides of the fight.

So after passing a resolution first proposed by Christine Pelosi in February to prevent corporate donations to the DNC, we adopted a series of similar measures that freed us to champion the most popular, people-friendly, election-winning policies:

But allow me to talk about jobs for a minute. Studies suggest that half of all remaining jobs—blue- and white-collar—could be automated away within 20 years. Regardless of whether that happens, a Universal Basic Income will help all people have a good future, regardless of their position in the wolf-eat-dog ethos that has been shaping up in our country. And a UBI would also represent, and necessitate, a step back from that ethos.

We can't let corporations, or corporate politicians, decide how it all works out. In the past, again and again, the people behind the Party of the People stood up against corporations and their politicians to achieve most of the things we call civilized: social security, the 8-hour workday, the weekend, an end to child labor, and so on.

It's time once again for people to decide how the world ought to be, and to stop leaving decisions in the hands of the children with the most toys. Starting today, the Democratic Party is going to serve the people once again by fighting for what people need and want, and that therefore wins elections. And we will begin by fighting to reduce the outsize influence of corporations in our democracy, by outlawing corporate lobbying in government and establishing the public financing of elections.

That's what the #DNCTakeBack is all about—because "better" just isn't good enough.